This post contains affiliate links, which means that I receive a small commission for any product purchased through a link from this site. Please see my disclosure for more information.
Share13
Pin372
Tweet
385 Shares

Visiting the North-West side of France? While I love Paris as much as the next person, I think the best day trips demonstrate the cultural (and historical) significance of the country. Don’t miss out on this experience by visiting one of the small towns below.

7 best day trips from Paris - the gardens of Monet, the cathedrals of Rouen, the beaches of Normandy AND MORE! Click To Tweet

Located a 45-minute train ride from Paris, Giverny is as easy to visit as the Palace of Versailles. Luckily for you, there won’t be hordes of tourists crowding around when you exit the station, nor will there be in town.

Giverny possesses a charm unlike any other village in France. The buildings and cobblestone roads are not only well-preserved but beautifully maintained and accented with flowers galore. 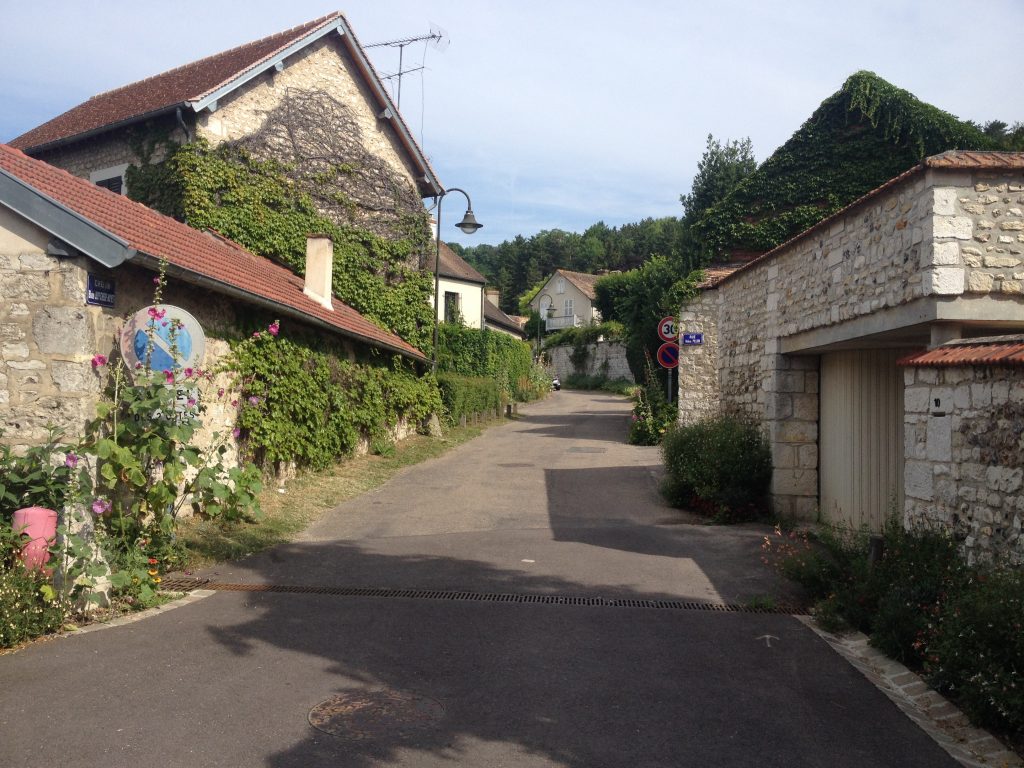 The first stop in Giverny must be The Monet Foundation. After viewing Claude Monet’s masterpieces in Paris, I was thrilled to see his gardens of inspiration in person. If you are visiting Paris, be sure to check out his most famed pieces on the 7th floor of the Musée d’Orsay. They now have one of the most important Impressionist Collections in the world! 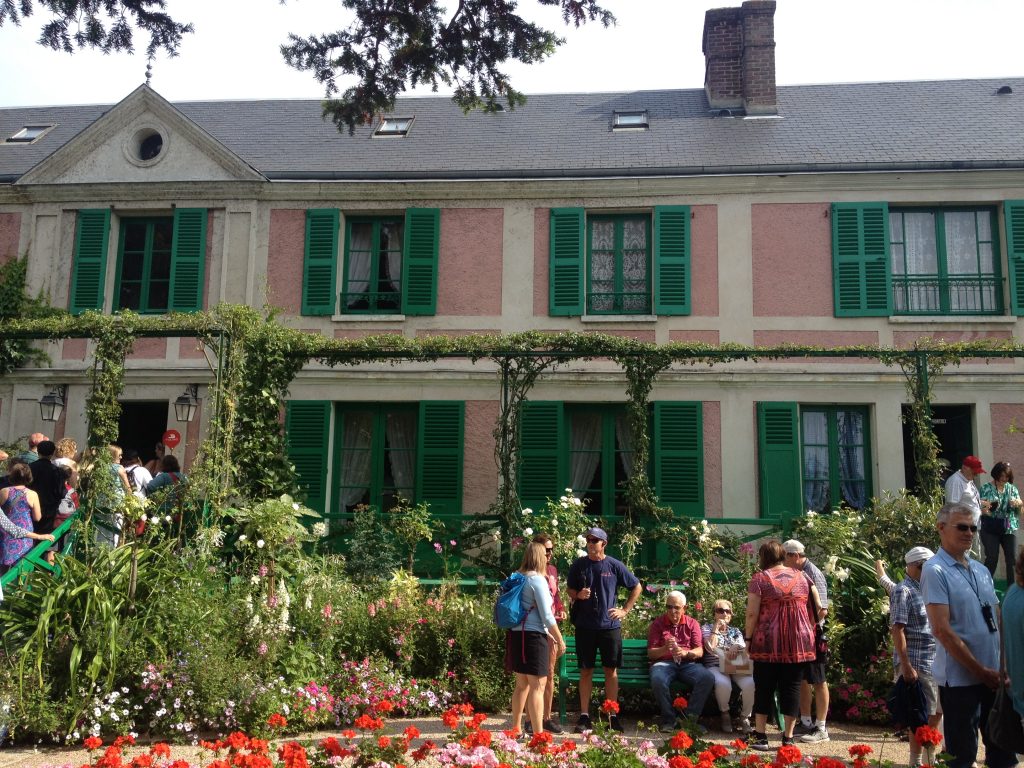 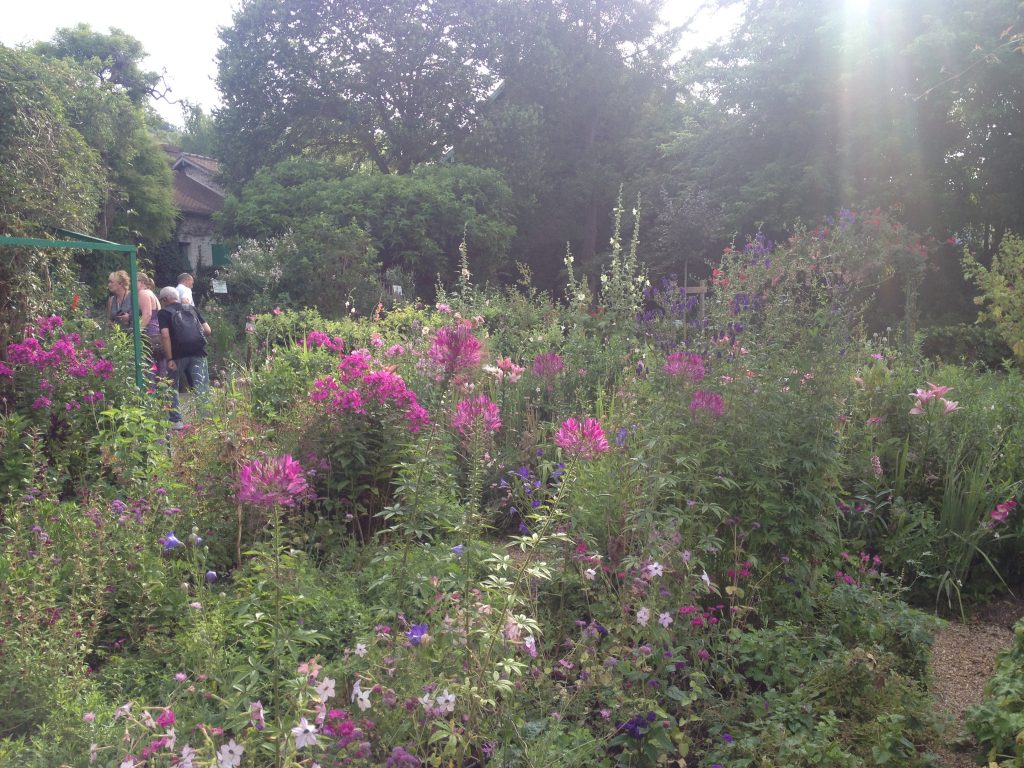 Monet’s farmhouse and landscapes are a sight to see, but they do not compare to the beautiful water features for which he is recognized. You can walk across the Japanese bridge, duck under the willow branches, and admire the water lilies that inspired his famous works. At only a 10.50€ entry fee, we considered this morning activity an absolute bargain. Note: The Monet Foundation property is only open from April 1st to November 1st. 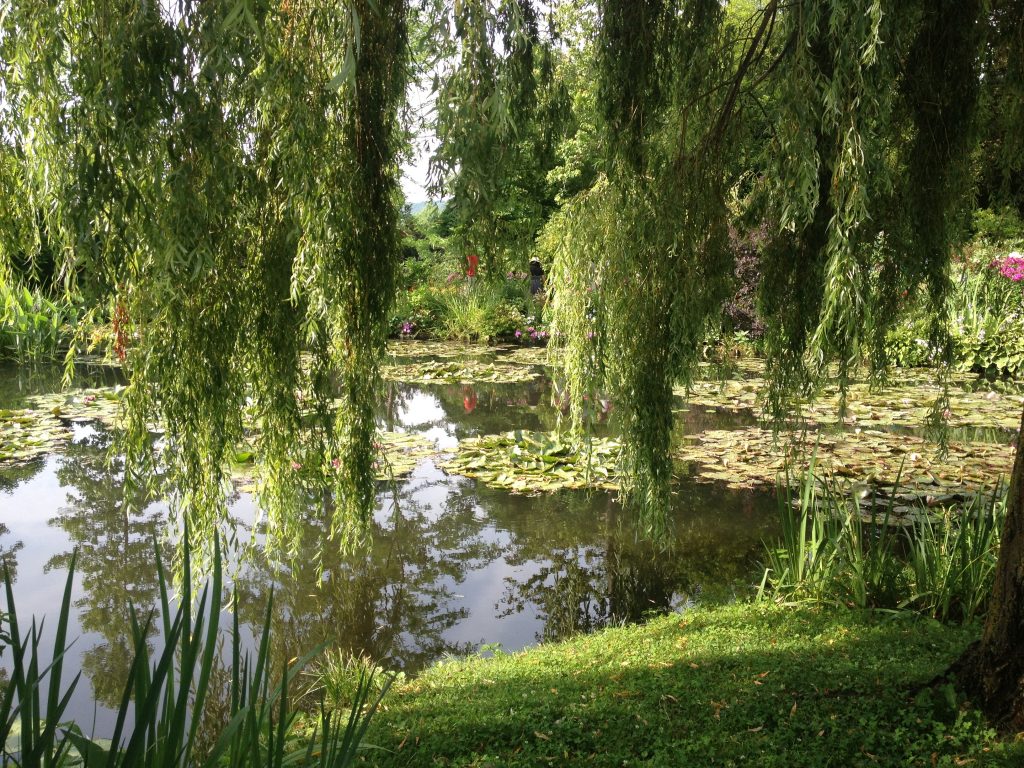 After a tour of Claude Monet’s enchanting estate, stroll down the road to the old church to see his grave. There was even a choir practicing in the church while we were there, which lent even more character to an already charming town.

If you are heading out to Giverny, you may as well make a day of it and visit the quaint town of Vernon. Located across the river from Giverny, Vernon has its own charm. Chances are, if you are coming from Paris, you will have to go through Vernon on the way, so why not stop and have a French pastry from the neighbourhood bakery! 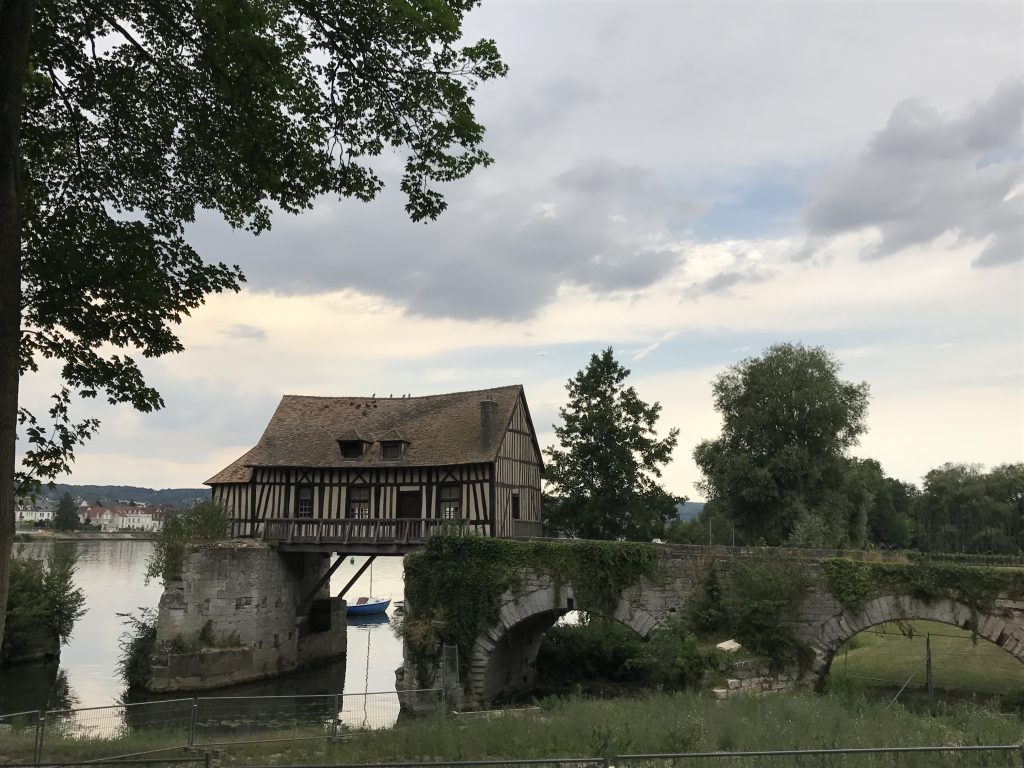 If you are visiting in the summertime, I would also recommend checking out the market in town for a bite to eat.

How to do both:

After a morning visit in Giverny, we walked from Monet’s gardens back to the bridge to Vernon. It took us about an hour to make the trek, after which we had lunch and explored Vernon in the afternoon.

Rouen is the birthplace of Jeanne d’Arc, or Joan of Arc in English. Don’t know her story? Acting on divine orders, she rallied the French Army and led them to victory over the English late in the Hundred Year’s War. Later captured, she was sentenced to death and burned at the stake in 1431. Five hundred years later, she was declared a Saint by the Roman Catholic Church.

Today, you can visit a church named after her (L’église Sainte Jeanne d’Arc), located in the Market Square (Vieux Marché) where she died. For a more modern twist on history, you can also participate in an Escape Room located inside Tour (Tower) of Jeanne d’Arc. 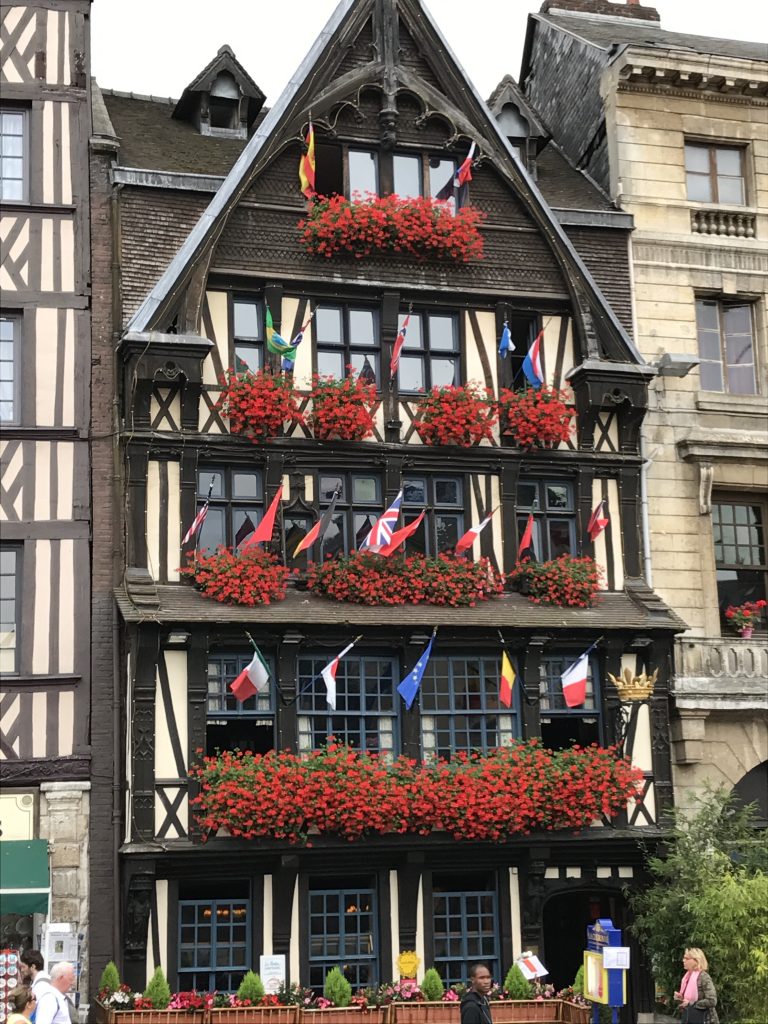 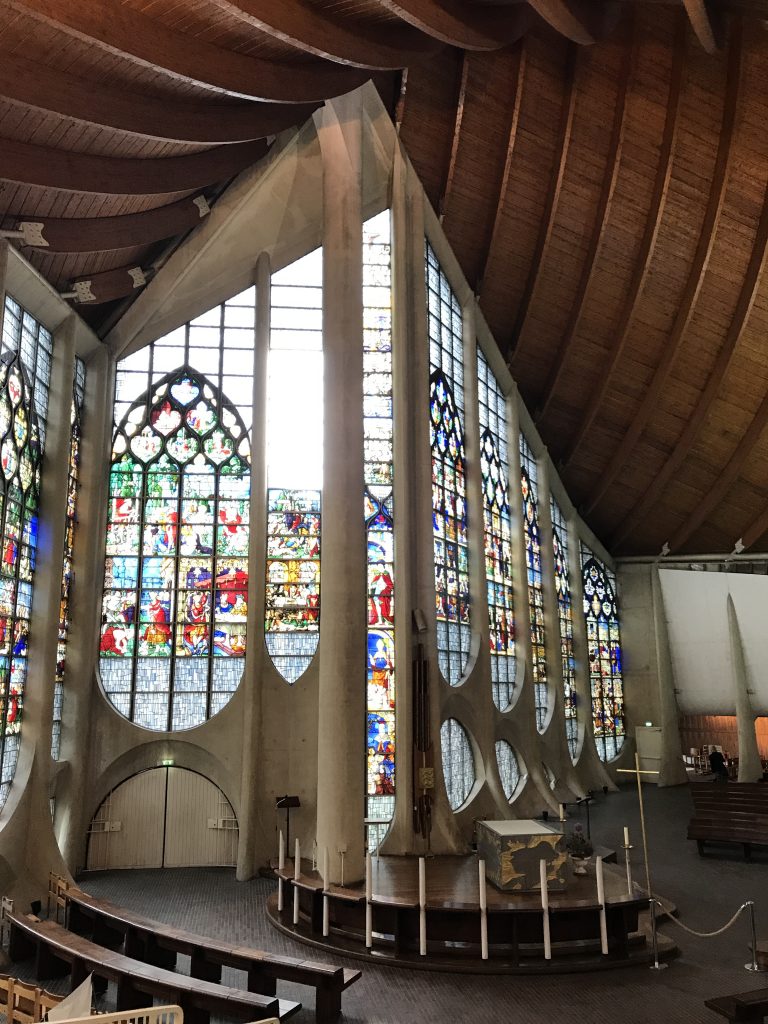 Rouen is easily recognized in pictures by its Gros Horloge (Big Clock). Built in the 16th century, you can see its gold face from almost any street in the downtown area, and it helps give the city that medieval feel. 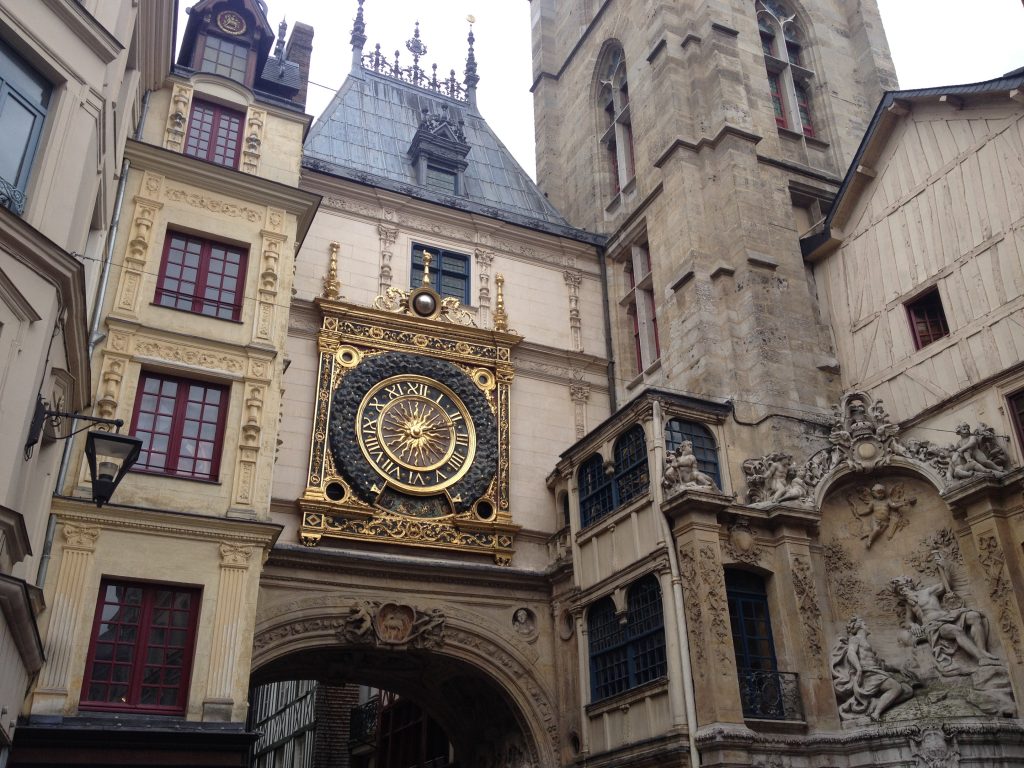 Known as the “City of a Hundred Spires,” Rouen will also leave you wide-eyed for the Gothic period. The churches are stunningly intricate and the craftsmanship is unmatched. I would encourage you to check out both Abbaye Saint-Ouen and Notre Dame Cathedral (yes, another Notre Dame in Rouen). You can also see the final resting place of Richard the Lionheart in the latter. 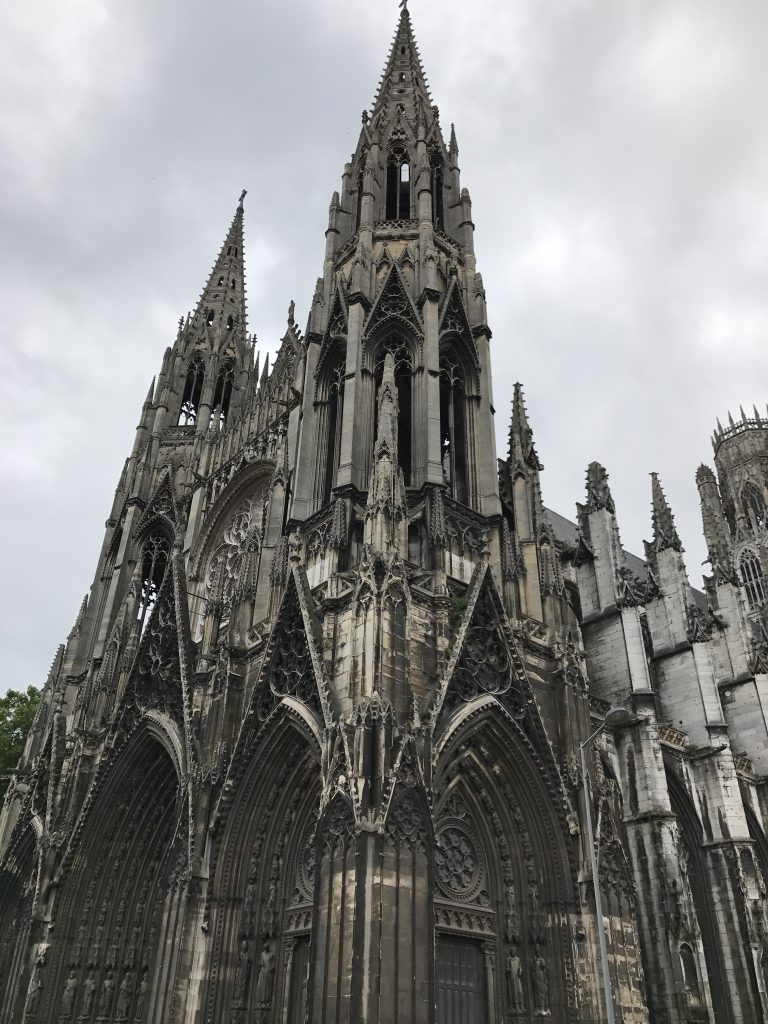 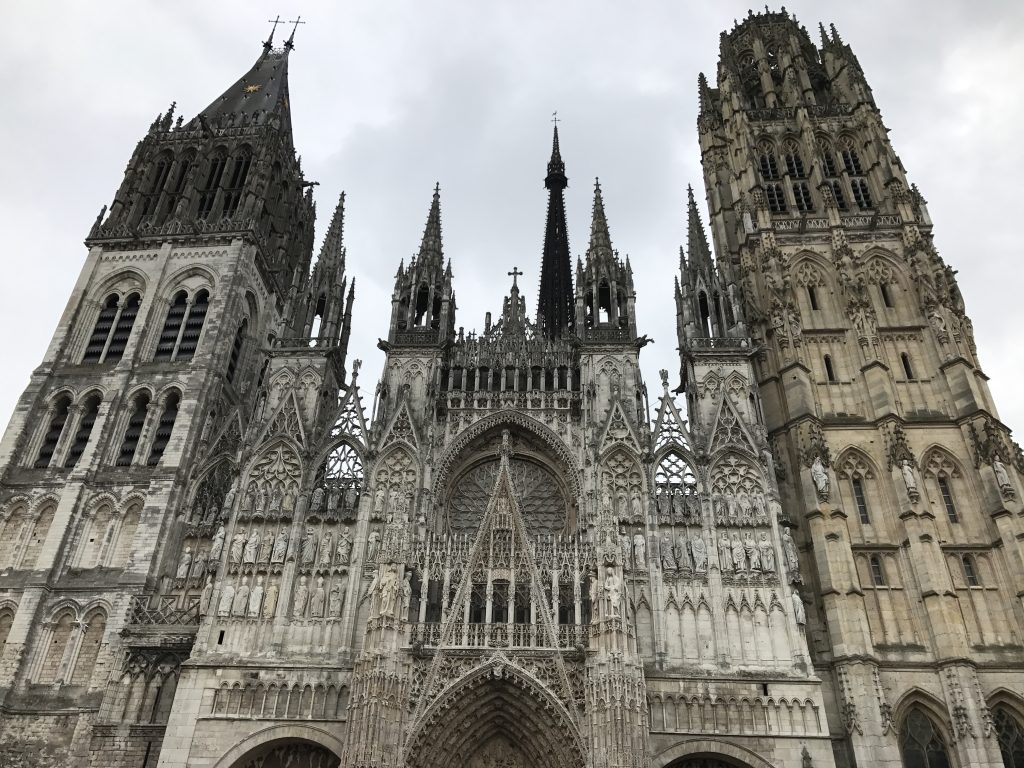 One thing that is an absolute MUST DO activity is seeing the Notre Dame Cathedral at night. There is a light show that depicts the story of William the Conqueror and it is AMAZING. Check out the pictures below to see what I mean! 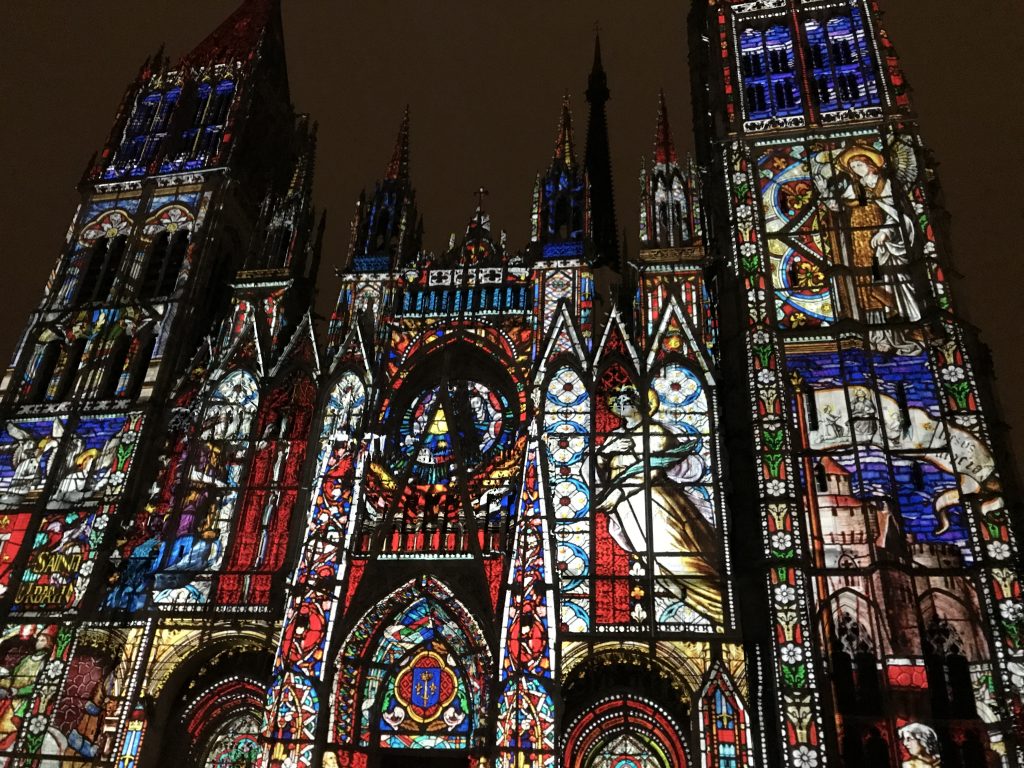 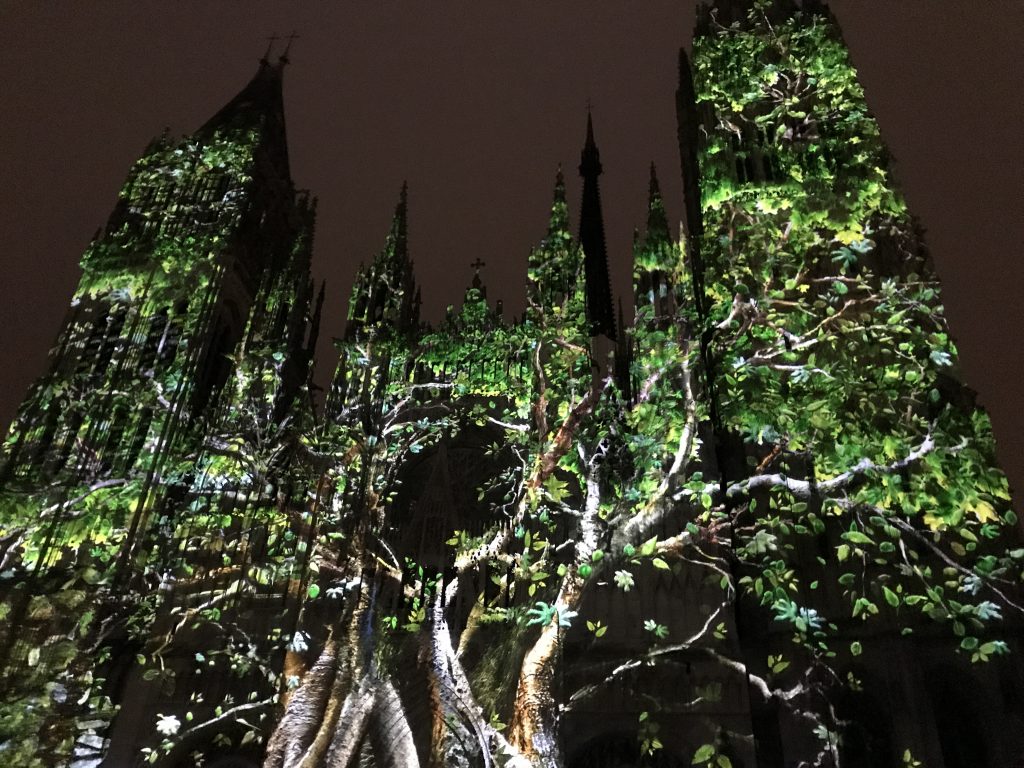 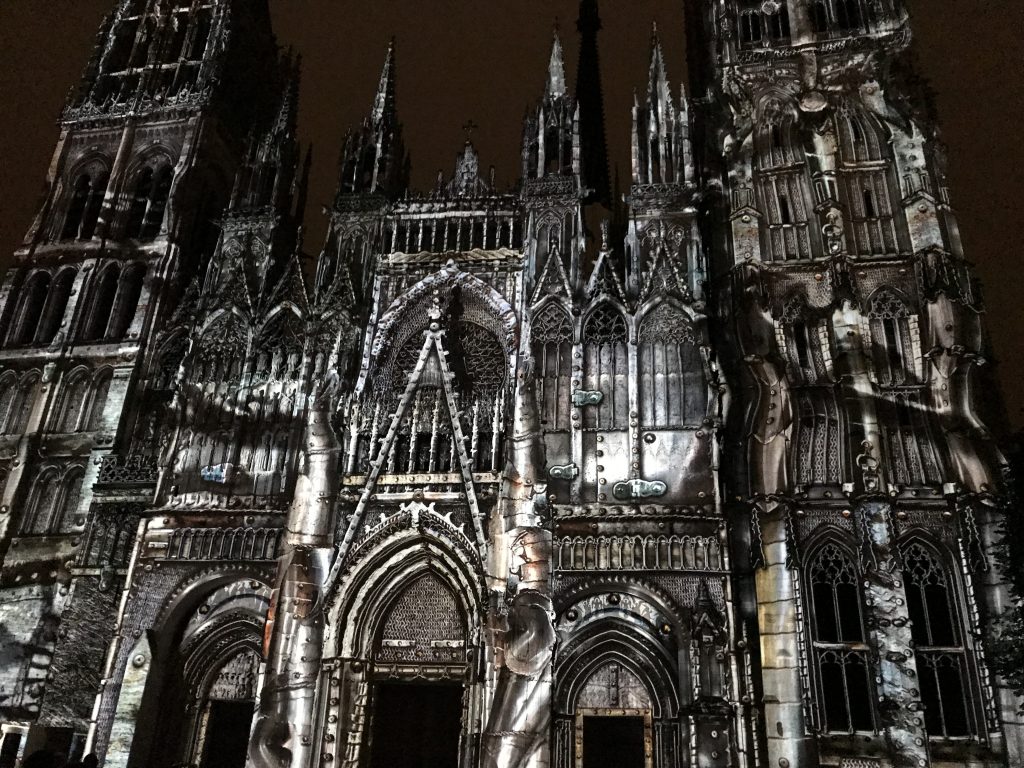 Interestingly enough, this was not on our initial itinerary! We made plans to go after talking to others visiting this small town. I am an early-to-bed kinda gal, so I was initially reluctant to stay up late to see it, but this definitely showed me that the best plans are sometimes made once you get there!

The must-see attraction in Les Andelys is Château Gaillard. Built by Richard the Lionheart in the 12th century, it is considered to be the most dramatic castle along the Seine River.

This fortress was rock-solid and occupied a naturally defensive position. With only one entrance and its prime location, Richard could not be defeated. If you are taking a day trip to Les Andelys, I would recommend a visit to this Middle-Ages masterpiece. 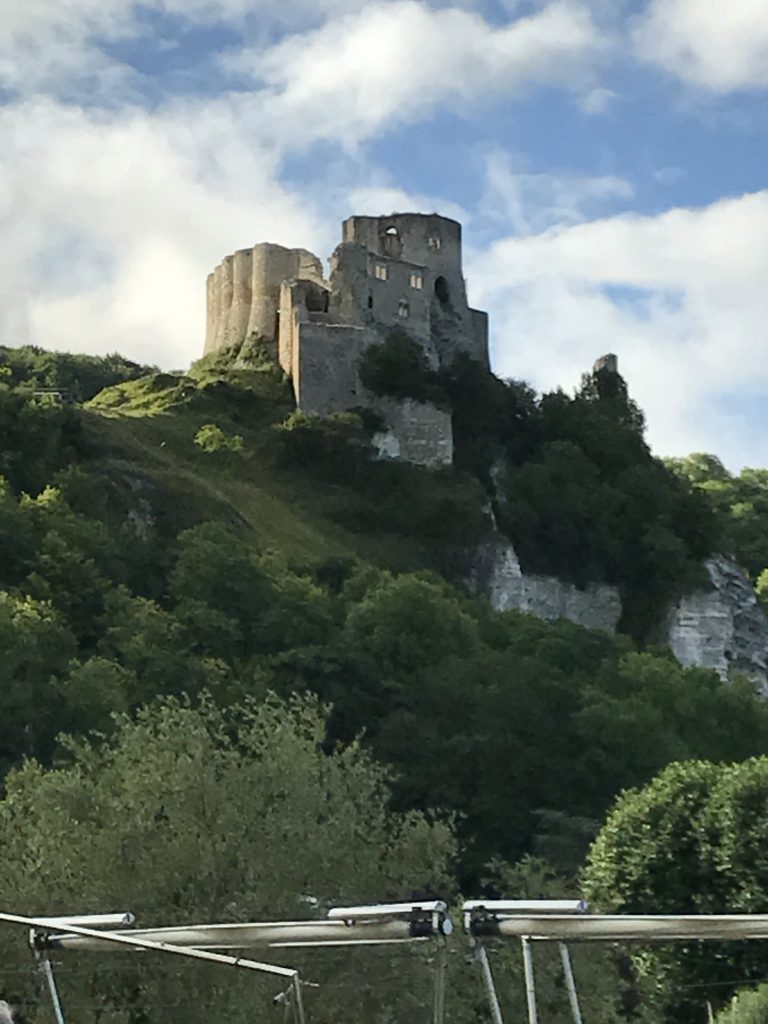 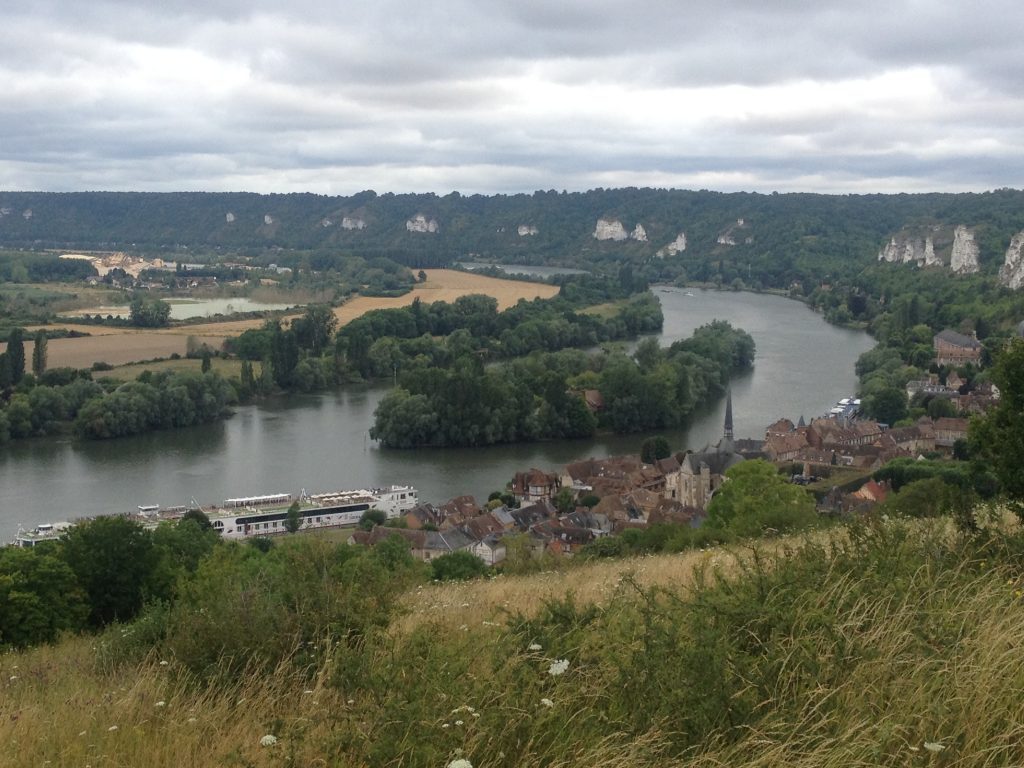 We walked a fair bit this trip, but I did consider this castle to be a solid hike to the top. There were uneven dirt paths and some questionable hills to climb, but we made it without falling. Not dangerous, although I would encourage you to have confidence in your step before attempting this climb. If you are not, well, they offer car rides to the top!

Cute shops, adorable bridges, and flowers at every corner are the touches that contribute to that small-town feel in Bayeux.

This museum displays the oldest artifact I have ever seen. Sewn carefully in the 11th century, the tapestry was designed to tell the tale of the Battle of Richard the Lionheart in 1066. Yes, you read that correctly, ONE THOUSAND AND SIXTY-SIX.

It is displayed in a case on the first floor of the museum, and they even offer an audio guide to tell you the story as you follow the 68m long tapestry. The second floor also offers displays and insights into the story of Bayeux. 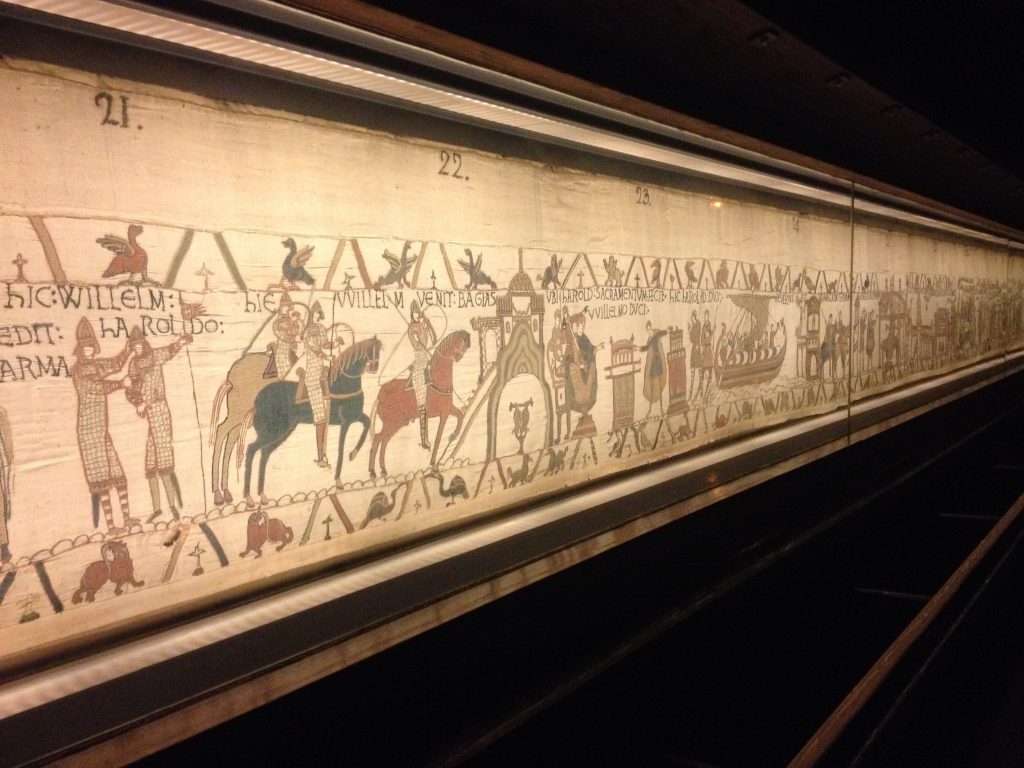 FUN FACT:  The current Queen of England, Her Majesty Queen Elizabeth II, is a descendant of Richard the Lionheart!

The Cathedral of Our Lady of Bayeux

Our second stop in Bayeux was the Cathedral of Our Lady Bayeux, which was the original home of the Tapestry of Bayeux. This is an ancient site!

This Cathedral was first consecrated by the Roman Catholics in 1077, in the presence of William, King of England. After sustaining damages, it was rebuilt in the 12th century, again influenced by the Gothic period. 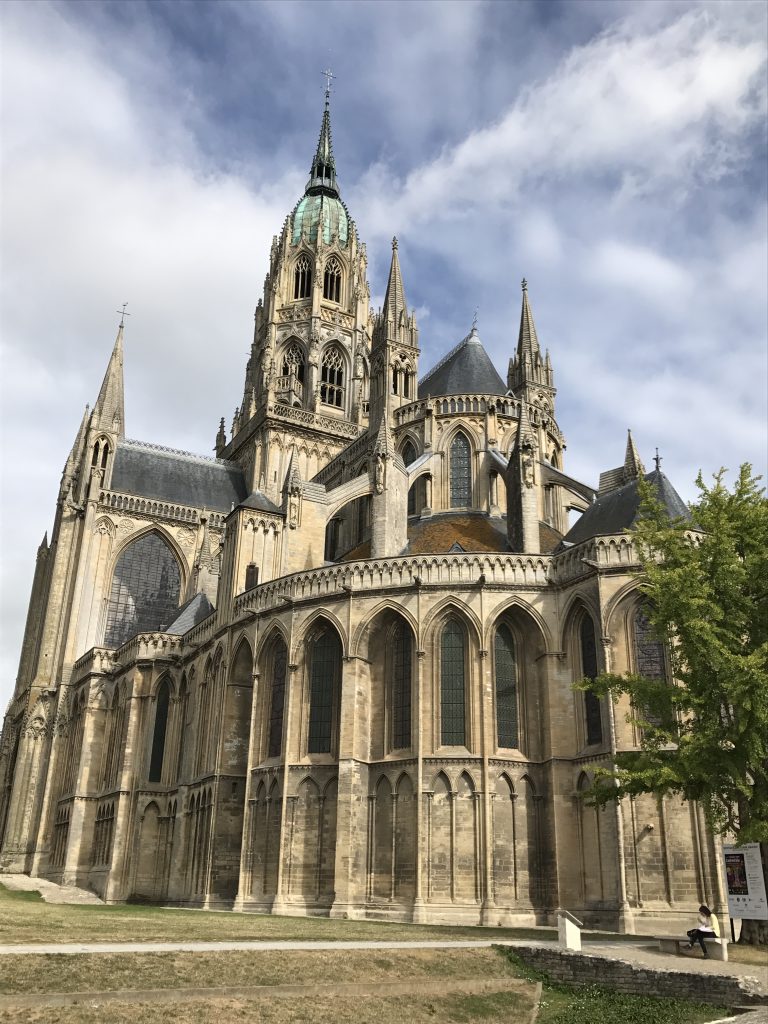 Arromanches is the town that had to be. Since the allies were unable to capture a port in WWII (Battle of Dieppe anyone?), they had to build one instead. The result was the town of Arromanches, where the Allied troops built a port to bring supplies ashore.

Although the war is over, the remnants of the port remain. Concrete retaining walls and rocks are prevalent, and you can see the cement blocks out to sea. It is not a somber site, but one of success and victory. We walked along the main street next to the D-Day store and it was full of adorable crepe carts and fun shops. 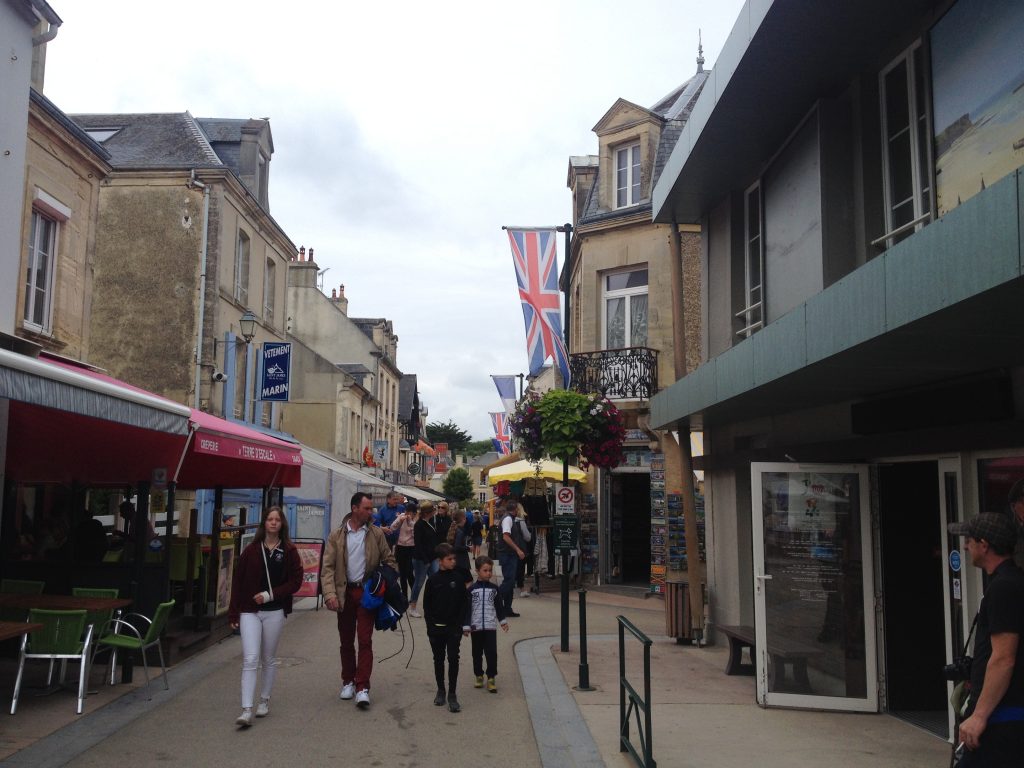 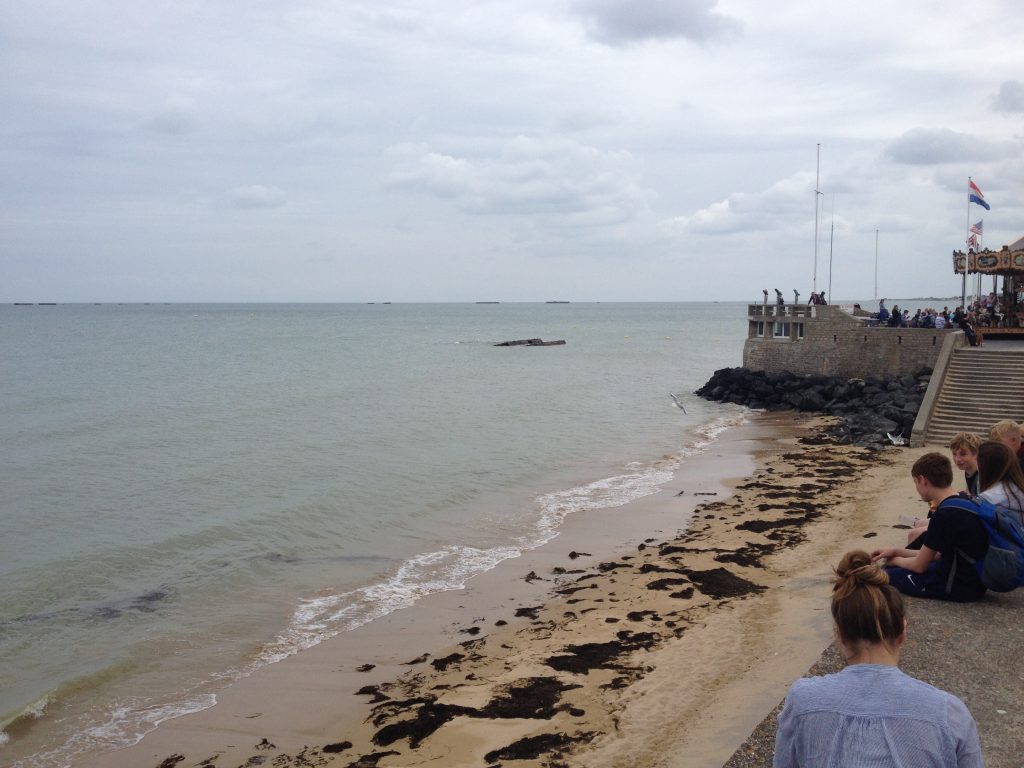 Arromanches is unique because, when you visit, the war doesn’t seem so far away. The visual cues remain and our tour guide himself recalled German soldiers asking his grandfather for a place to hide.

What would a trip to Normandy be without a visit to the famous beaches that the Allies stormed in June 1944?

As Canadians, we made sure to marvel at the dark water of Juno Beach and reflect at the museum. The Juno Beach Centre is very well done – there is a video upon entry and exit, which is definitely humbling and puts the war into perspective. If you hail from the States, don’t miss stopping by Omaha Beach and the Normandy American Cemetery and Memorial. 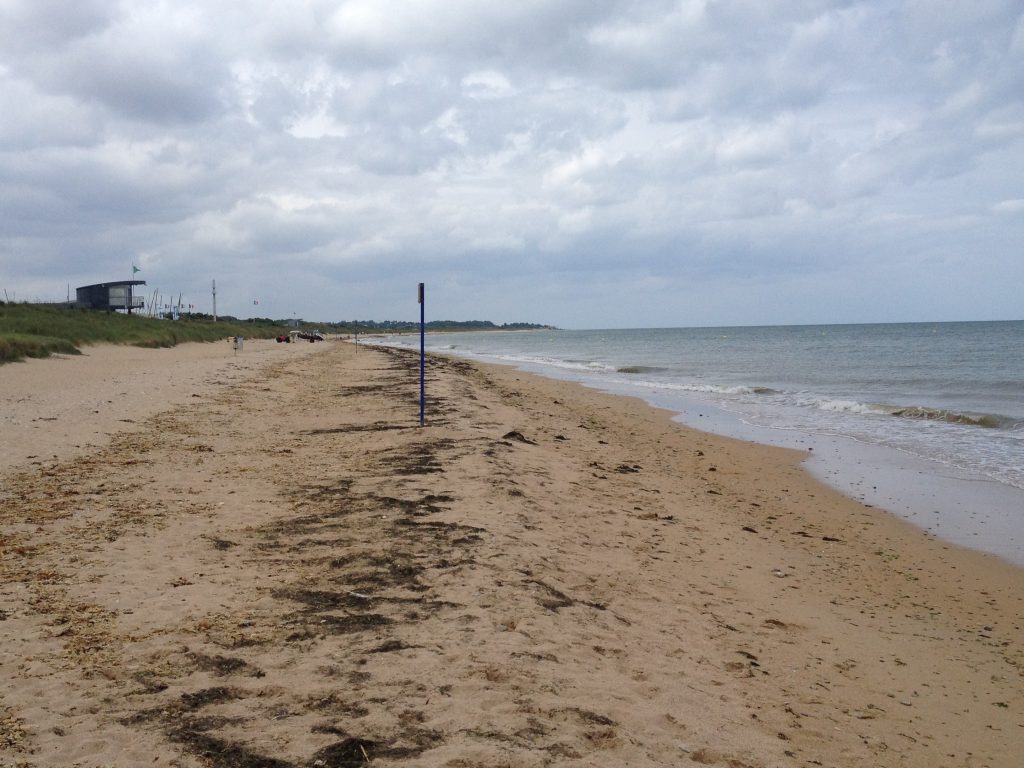 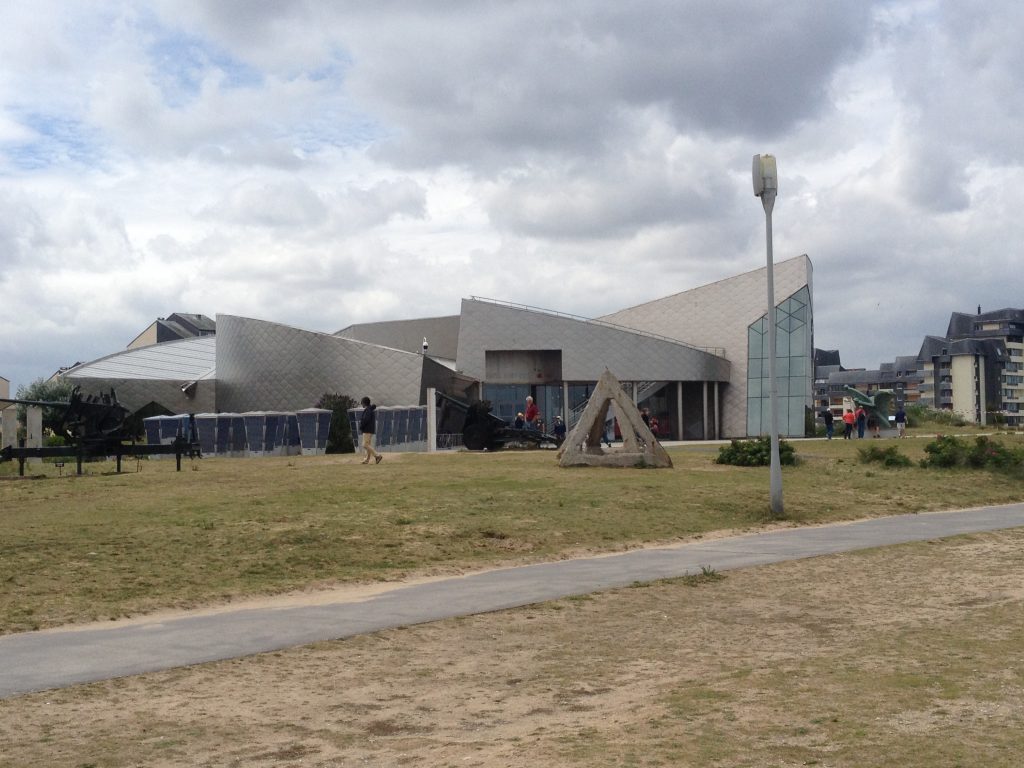 While traveling around Normandy, we also stopped to visit Bény-sur-Mer Canadian War Cemetery. At the time of our visit, we were fortunate enough to witness a ceremony put on the Canadian Legion for Canada’s 150th anniversary. Definitely a moving experience.

I traveled here in 2017. As always, be sure to check your country’s travel advisories before booking any trips or excursions. You can check out the Canadian opinion here.

Let me know in the comments if you plan on making a trip to one of these small towns!

All you need to know to visit the Vimy Ridge Memorial

Is the Paris Museum Pass Worth Your Money?

How to get to Versailles from Paris

Pin it for later! 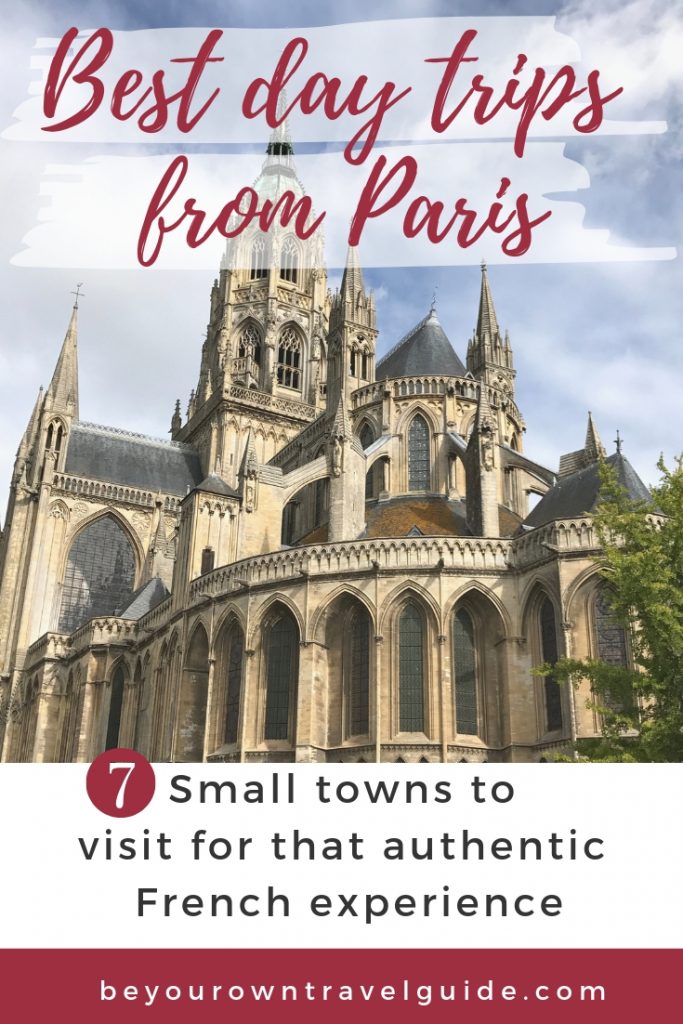