This post contains affiliate links, which means that I receive a small commission for any product purchased through a link from this site. Please see my disclosure for more information.
Share
Pin337
Tweet
337 Shares

Everybody has an idea of what they would like to see when they visit a new city.

When strolling through Paris, it is essential to have a look at the iconic Eiffel Tower.

Visiting London? Be sure to take a selfie in front of Big Ben or Tower Bridge.

PICS OR IT DIDN’T HAPPEN. Even I am guilty of this mentality.

Eventually, you get to the point where, jammed in between fifty thousand people, you get tired of waiting in line and wonder…is this even worth it?

That doesn’t mean that you didn’t want to see the landmarks. It just means that you need to travel smarter in order to enjoy yourself.

Whether you are seeking a classic itinerary or off-the-beaten-track, check out these alternatives below for places to visit in Amsterdam. 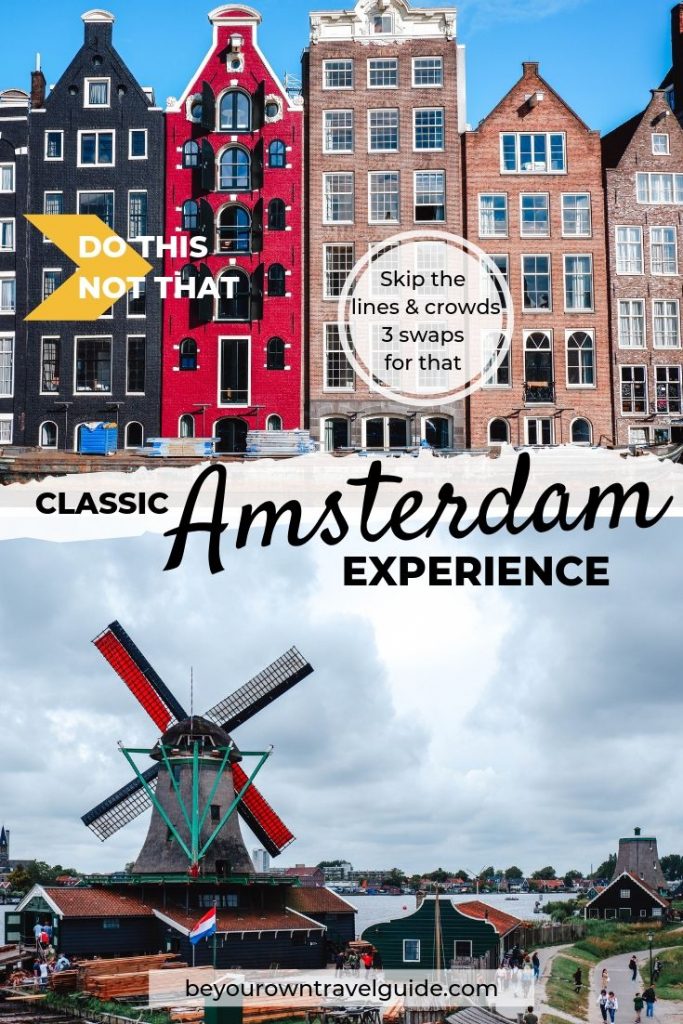 Instead of the Anne Frank House…

Anne Frank was a Jewish girl who kept a diary of her time hiding in Amsterdam during the Nazi rule. Her story starts at the Anne Frank House, which is located near the popular Jordaan neighborhood in the city.

Now a museum, the Anne Frank House tells the story of how her family came to the Netherlands and the tragic demise of the seven of the eight people living in her house.

Tickets for the Anne Frank House are only available online and sell out MONTHS in advance, so it can be difficult to snag an opportunity to see the hidden Annex in person.

The National Holocaust Museum highlights the timeline and stories of the Jewish people in photos between 1940-1945. You can learn about the isolation, intimidation, and ultimately the persecution of the population, and see for yourself how they were set apart by a Jewish Identity Card and how they were not allowed at swimming pools, theatres, or other public sites.

The National Holocaust Museum is a worthy choice because the displays are all based on personal accounts. Although the story of Anne Frank may be the most famous one, 102,000 Dutch Jews were killed in World War II.

In the words of Mr. Impatient: “I liked the Holocaust Museum better because there were more pictures and fewer people.”

There are other historical sites in the Jewish Quarter that are worth checking out as well:

National Holocaust Memorial: Previously a theatre, this moving memorial used to be a holding site for the Jewish people before they were transported to a concentration camp. It is located directly across from the National Holocaust Museum and could easily be combined in one trip.

Jewish Historical Museum: This museum is unique as it is the only one in Amsterdam to focus on Jewish history, religion and culture. However, there is also one section devoted to the oppression of the Jewish people in World War II. There is even a Children’s Museum that is definitely worth checking out, as even your little ones will be entertained.

Portuguese Synagogue: Left untouched by the Germans, the Synagogue is essentially the same as it was since its construction in 1675. At the heart of the Jewish Quarter and with architecture that displayed the wealth of the community, it is one of the top sights to see in Amsterdam. They even offer an audio guide!

RELATED POST  Which Monument offers the Best View of Paris?

Take the 14 Tram from Centraal Station and get off at the Artis Stop. The Holocaust Museum and Memorial are on opposite sides of the street directly in front of the Artis Stop.

Instead of the Heineken Experience…

Everyone loves a good story of the underdog, and it sure is interesting to see how one small brewing company in Amsterdam became one of the top 3 beer producers in the world. I can see the appeal.

Here’s the catch:  with over 3,000 people a day visiting the Heineken Experience and no air conditioning inside, I would rather spend my €21 on (gasp!) beer!

Fortunately, there is another option that is not only interesting, but better than the first.

Located on the East side of the city and easily accessible by bus, Browerij’t IJ is a smaller brewery with great classics and some funky flavours to try. Oh, did I mention that it is in the only windmill in Amsterdam??

They offer a 5-beer sampler for the adventurous at heart, with options to try the IPA, a stout, a pale ale, or even a hibiscus!

The best part is they also offer tours, for a fraction of the price, and it also includes a beer sample!

Beer and snacks in a windmill? I would consider this one of the best attractions in Amsterdam.

Take the 22 bus from Centraal Station. We got off at the Oostenburgergracht Stop, but you will be able to see the windmill, so don’t worry about missing it.

An imposing structure in the hub of the Museum District, Rijksmuseum gained popularity in photos with the Iamsterdam letters.

After struggling to support the mass waves of tourists attempting to get that clichéd shot, the letters were removed last year. Unfortunately, the Rijksmuseum is still excessively busy, most likely due to its large collection of Rembrandt paintings and the Van Gogh Museum next door.

There is still a lot to see inside: the 8,000 pieces spread across four floors highlight Dutch, European and Asian art from the Middle Ages to present times.

Like the Rijksmuseum, Tropenmuseum also displays artifacts and art from around the world. Coming in at over a million objects and images, you would be hard-pressed to see it all in one day.

While Rijkmuseum focuses on pieces through the ages, Tropenmuseum makes an effort to highlight cultures. Currently, there are exhibitions on objects of personal significance, Japanese pop culture, and the Dutch stories of a pilgrimage to Mecca. All of this can be seen in arguably one of the most beautiful buildings in Amsterdam.

The Tropenmuseum also has a children’s section! With a focus on the 5 senses, kids of all ages get to participate in and enjoy diverse artistic experiences.

Take the 14 Tram from Centraal Station and get off at the Alexanderplein Stop.

Bonus: Tropenmuseum is located right beside Oosterpark. Be sure to bring some snacks for your stroll in the park afterward!

Pssst – you can check out where the Iamsterdam signs are now by visiting iamsterdam.com/the-letters.

This website uses cookies to improve your experience while you navigate through the website. Out of these, the cookies that are categorized as necessary are stored on your browser as they are essential for the working of basic functionalities of the website. We also use third-party cookies that help us analyze and understand how you use this website. These cookies will be stored in your browser only with your consent. You also have the option to opt-out of these cookies. But opting out of some of these cookies may affect your browsing experience.
Necessary Always Enabled
Necessary cookies are absolutely essential for the website to function properly. This category only includes cookies that ensures basic functionalities and security features of the website. These cookies do not store any personal information.
Non-necessary
Any cookies that may not be particularly necessary for the website to function and is used specifically to collect user personal data via analytics, ads, other embedded contents are termed as non-necessary cookies. It is mandatory to procure user consent prior to running these cookies on your website.
SAVE & ACCEPT
337 Shares
Share
Pin337
Tweet